The Most Famous Lighthouses To Shine In Florida 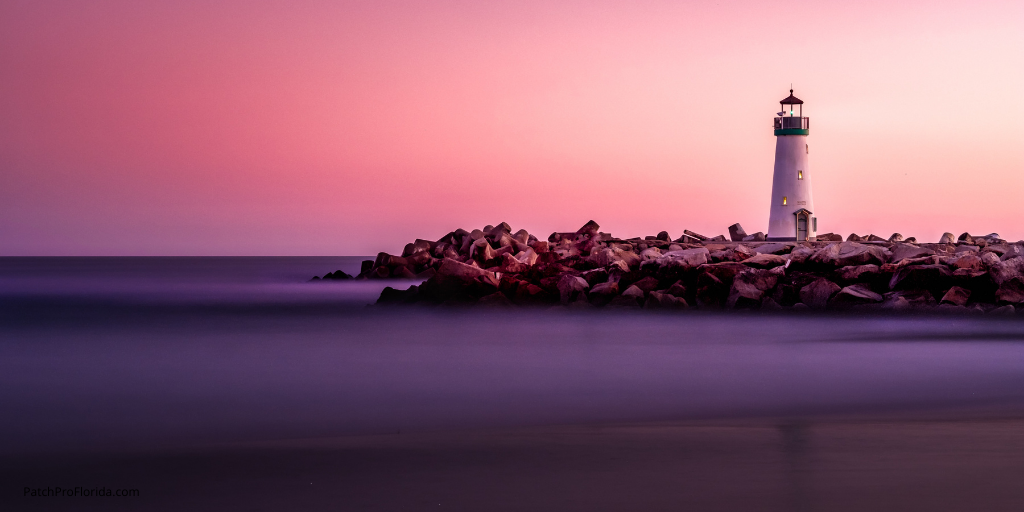 The Florida coastline stretches for more than 1,800 miles — the longest span of shore across the United States. To keep ocean navigators safe throughout the sizable waterfront, plenty of lighthouses were built to guide mariners through treacherous waters, their rotating lights comforting beacons directing these sailors back to the safety of land.

Lighting The Way Across FL

Thirty lighthouses remain intact; these restored structures are operated by the state, granting residents and tourists alike exposure to these important installations firsthand.

These beacons stretch from coast to coast, overlooking both the Atlantic Ocean and the Gulf Coast.

Evolving from fires lit on hilltops, the modern era of the lighthouses began at the turn of the 18th century to accommodate transatlantic commerce. The building’s function was primarily to warn of incoming hazards — such as rocks or reefs — for incoming ships. Originally an octagonal wooden structure, the design later evolved to hydraulic lime and granite blocks for structural stability. Civil engineers improved features throughout the years, incorporating rotating light sources, reflector designs, and installing Fresnel lenses (aka the invention that saved millions of ships).

Here are The Most Famous Lighthouses in Florida that are still standing. All of these lighthouses make for a great one-hour family road trip to enjoy a bit of Florida history.

The iconic black-and-white spiral design of the tower, complemented by a red lantern, attracts nearly 220,000 unique visitors to the Sunshine State staple annually. It’s the only lighthouse in the world that has this combination and stands as the 10th largest tower in America.

Boasting over 500+ years of maritime history, St. Augustine is the definitive Florida lighthouse. The first wooden watchtower was erected in the late 1500s. The Florida Reconstruction Period granted $100,000 for a new lighthouse in 1874 and the 165-foot tower was constructed. The jewel-like lens was nine feet tall and followed a nine-minute revolution, illuminating 19-24 miles — depending on nautical conditions.

A connected museum showcases 19,000 unique accouterments. In 2017, the museum was accredited by the American Alliance of Museums and is Smithsonian-affiliated.

This white tower beacon is positioned on a wilderness island located off Tampa Bay and has guided thousands of sailors to the safety of their homes for several generations.

Built in 1848, this was the only lighthouse on the west coast situated between Key West and St. Marks. The present building was relocated via reconstruction in 1858. The oldest structure in the Tampa Bay Area can only be accessed by private boats and ferries throughout the St. Petersburg area. Standing at 87 feet tall, it has deep-seeded history in both the Civil War and the Spanish-American War.

This is the perfect location for people trying to avoid the tourist trap crowds. After being ferried to the island, guests have five hours to explore white sandy beaches, observe inhabitants of the national wildlife refuge, and sample local cuisines.

Located on the Anclote Key Preserve State Park offshore Tampa Bay, visitors are welcome inside the skeletal square pyramid to scale the 127 steep spiral stairs to the very top. After being repeatedly vandalized and eventually discontinued in 1984, the tower was turned over to the State of Florida, where it was restored and relighted using a Fresnel lens.

Anclote Key consists of a four-mile nature preserve accessible only via boat; without running electricity, potable water, or toilets, the area is limited to accommodating primitive camping.

This 175-foot tall crimson tower is one of the largest masonry towers in the USA. Completed in 1887, it’s reliable light guided sailors through one of the most treacherous inlets in the South. This is one of the few National Historic Landmark light stations that has retained all of its original construction. 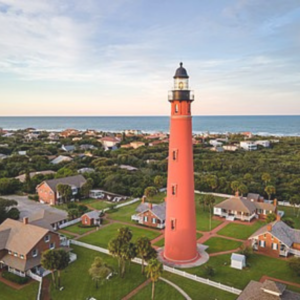 A 203-step staircase elevates visitors to the main gallery, unveiling a breathtaking panoramic view of the Atlantic Ocean. The building also has an exhibit hall highlighted by a massive collection of Fresnel lenses.

Positioned ten miles from Daytona Beach, the building is considered one of the most authentic and complete representations of historic lighthouse construction in the country.

Conveniently positioned directly across from the National Naval Aviation Museum and overlooking the entirety of the Gulf Coast, the Pensacola Lighthouse is one of the only active towers still in Florida. Built in 1859, the tower has remained resilient over the years; the structure has stood steadfast, withstanding assaults from Union forces and natural disasters.

The lighthouse is maintained by the U.S. Coast Guard and the Pensacola Lighthouse Association, successfully preserving the original keeper’s quarters, decorated with several artifacts from the early Spanish and Civil Wars.

Guests can enter and climb the 100+ stair flight to the tower, embark on a ghost hunt, or reserve the best seats in the house to witness the U.S. Navy Blue Angels take off on practice flights.

Seated on 122-acres of reservation, the red tower was first illuminated in 1860 for maritime and communication purposes. The building was designed by Union general George Gordon Meade, who made a name for himself as an architect from his revolutionary screw-pile designs. Besides the victor at the Battle of Gettysburg, Meade was also single-handedly responsible for building six separate Florida lighthouses.

Atop the 108-foot Jupiter Inlet tower sits its original Fresnel lens — the oldest in the entire state. The structure is positioned on a 48-foot Indian shell mound platform that dates back 5,000 years. A live camera monitors the view 24/7 from atop the lighthouse. A museum is dedicated to the 70 different lighthouse keepers that manned the lamp through a near 70 year period.

Question: Have you visited any of these lighthouses? If so, tell us about your visit in a comment below.