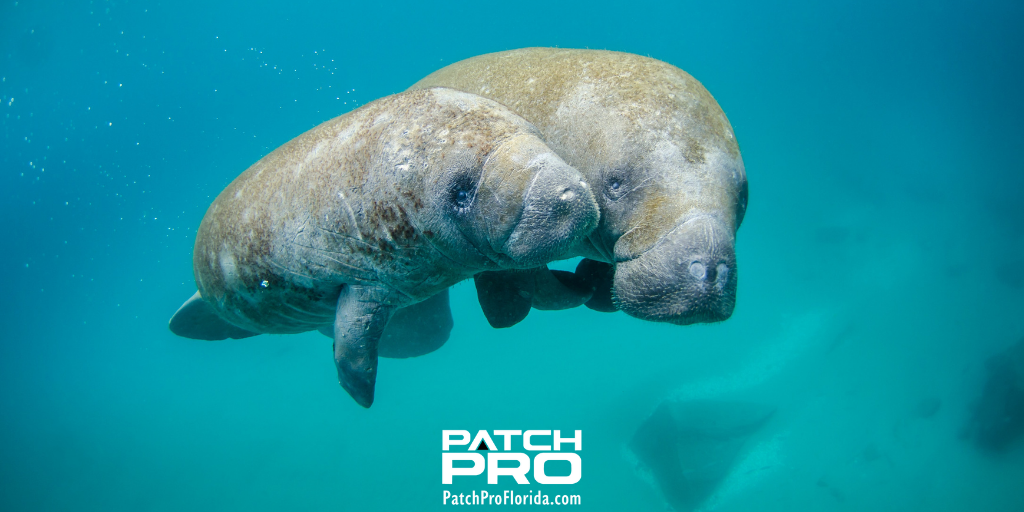 They call them the mermaids of the sea. The lovable (and blubbery) manatees are a coastal mammalian staple of our state. These herbivores are some of the most beloved ocean visitors in the wild. You can find the seacow munching away on food for half the day, eating at least 10% of their body weight (up to 1,200 pounds!!!).

With their low metabolism rates and minimal fat protection from chilly temperatures, manatees are frequently seen around Florida, comfortably lazing in waters that are always 60 degrees or warmer.

History Of The Manatee

Sea cows, or the protosiren, first appeared during the Eocene period 55 million years ago, with the modern Florida manatee populating North America 12 million years ago. Fossilized remains have been recovered from the United States’ east coast, stretching from Florida to Maryland.

The global migrations of the species frequent coastal waters, estuaries, and freshwater rivers.

The only year-round gathering of manatees in our country occurs throughout the coastal waterways of Florida and Georgia, with sporadic wanderers ranging as far north to Rhode Island. In particular, our state provides vast quantities of seagrass, the preferred submerged aquatic vegetation for manatee feeding. Because of the abundance, these locations are preferred manatee habitats.

The trichechus manatees latirostris (phew, say that five times fast) often lounge around freshwater springs in our Sunshine State. They also create their own ecosystem; fish aggregate around its body and feed off the growing algae, flourishing due to the manatee’s slow movements.

In honor of Manatee Awareness Month, let’s look further into these amazing mammals.

They Spawned The Mermaid Myth

Despite their fat, spotting manatees seriously confused early-day explorers. Even the much-maligned Christopher Columbus claimed to have seen women frolicking in the ocean… three times.

Columbus wrote, “they are not so beautiful as they are said to be, for their faces had masculine traits.” Uh yeah… wonder why.

Whether this was a simple case of cabin fever, or seamen were consuming too much seawater, it turns out many of the encounters were friendly manatees. The scientific name for manatees and dugongs — Sirenia — derives from mythical mermaids and sirens.

Manatees are easily injured or killed due to their large size and sluggish pace. Their unusual physicality makes them vulnerable to being hit by motorboats and entangled in fishing nets. Warm summers also see the growth of poisonous algae, which create toxins that contaminate wetlands and pollute the seagrass that they eat.

Annually, nearly 300 manatees perish in the cold waters in winter. Florida manatee deaths hit a record high this year, with over one thousand killed, a staggering 10% of the state’s population — double the five-year annual average. More than half of the deaths derive from the Indian River Lagoon, where ongoing water issues have led to a widespread loss of seagrass.

Messing With Them Is Illegal

Because of their endangered classification, harassment — such as hugging or riding the sea creatures — is against the law. In the wild, the manatees have no natural predators, save man. Half of their deaths are attributed to human interactions.

Their incredibly slow buoyancy (they average three miles per hour) makes them easy targets for curious people. Any touch could impact the manatees’ natural behavior. Misdemeanor charges could entail a $500 fine and up to six months in jail.

They Have A Strange Anatomy

Manatees may look obese, but the mass of their body is made up of intestines and stomaches. 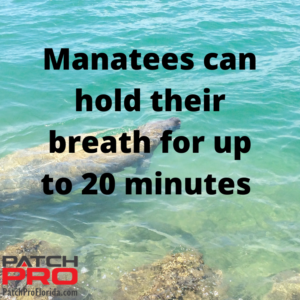 Their lungs require them to breach the surface every three to five minutes, though they can hold their breath for up to 20 minutes. 90% of the air in their legs is replaced; in comparison, humans only recycle 10% of their breath.

Because they lack the neck vertebra that most other mammals have, they are forced to move their entire bodies, just to look around.

Additionally, their brains are smooth and incredibly small; the ratio compared to their body size is the lowest of any mammal. Despite the diminutive size, they acknowledge touch and can distinguish between colors.

They Are Amongst The Most Popular Marine Life In Florida

Throughout our state, there’s plenty of places to see the manatees in the wild. You can spot them in the Everglades, the Florida Keys, and Lake Okeechobee. From Tarpon Springs to Merrit Island National Wildlife Refuge, and in Tampa, you can come to visit these sea animals in season.

However, none are as popular as Crystal River. During the winter months, hundreds of manatees rest in these crystal clear bays, searching for warmer temperatures throughout the warm mineral springs distributed by the Gulf of Mexico.
It’s also the only location in Florida where you can swim with them. The peak season for safe interactions lasts from November through April. The site also serves as a refugee for rehabilitation and release.

Their Relatives Aren’t Who You Think

The closest living relatives of the manatee are elephants. Fossil records show a much more diverse species of sirenians than what we have today, indicating that the manatees evolved from the same land animals as the elephants over 50 million years ago.

Similar to their landlubber cousins, manatees continuously replace their teeth throughout their lives. Older teeth in the front fall out and the new teeth replace them; 30 or more molars are used in a lifetime, most worn down by constant bottom feeding.

Other common manatee ancestors include the aardvark and the gopher lookalike hyrax.

They Are An Indicator Species

The manatee diet consists of 60 species of underwater and floating plants, dependent entirely upon the locations of foraging sites. Their preferred cuisine is the plentiful seagrass that grows along the seafloor.

Because of their herbivore feeding, their diet is a good indicator of an ecosystem’s health. If the manatee is full, their environment is thriving; if they are famished, their surroundings are compromised.

Interested in learning about another popular Florida creature? CLICK HERE to learn about where you can spot alligators in Florida.